Today, Patrick and I took a friend that Patrick made at International Christmas out to lunch (at Cora’s… How Canadian of us).  More on that part of the adventure another time.  While there, we were admiring the view of the harbour and Signal Hill and we discovered that he had never been up to Signal Hill before.  Well, one thing one cannot miss when in town is Signal Hill, so we decided to take him up.

It was a unseasonably beautiful day… Not in temperature.  I lost feeling in my hands almost instantly upon exiting the car.  And the wind was, as usual, blow you off the edge of the cliff if you’re not careful.  But, it was sunny and clear. 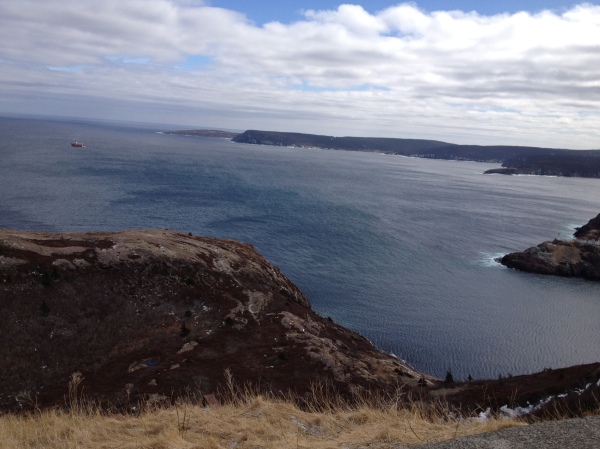 We were in for a special treat.  A few icebergs from last year have recently floated their way near the harbour and were visible from Signal Hill.  Usually this only happens in late summer, so this is a pretty big deal.  Plus, most of the really good ones are usually seen from other parts of the island.  But somehow, a few have floated down near enough that they can be seen from a place that I usually consider the most beautiful in the city.

The icebergs were very small, especially at surface level, but that doesn’t change how amazing they are.  These icebergs made a massive journey from the north.  They have been steadily shrinking.  And yet they are here.  And they are interesting to see, even though at face level they weren’t.  You see, most of the iceberg is under water.  Much like people, we only see the surface, but things go much deeper than that.  And they come from a long history that we often can’t even really imagine.

Despite the cold, the beautiful scenery gave me hope for spring and reminded me of the beauty that comes from a mix of nature and history.  I am glad we got to share it with our new friend from far away.

One thought on “Iceberg dead ahead!”