While away at the cabin for the weekend with the small group, we decided to make waffles.  This was not some sort of whim, it was strategically planned right down to me bringing whipping cream and each of us bringing a predetermined fruit for a topping.

The problem arose when the “fully equipped” cab it kitchen did not have electric beaters… Or even a whisk.

Thus began an adventure of sorts.

I started with a fork and when that was clearly failing, I tried a pasta spoon.  Still no luck.

So, one of the guys, W, started with a fork again… Then, a serving spoon.  Then, a potato masher.  Still, no big results… Just a few bubbles.

It then started getting ridiculous.

We found a wire egg cup in the cupboard… Just one.  The guys managed to attach it to a spoon and tried to use that.  Still not the most effective. 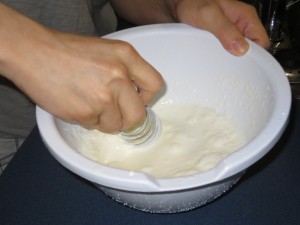 So, we did what any twenty-first century group of young twenty and thirty-somethings would do.

We Googled how to make whipped cream… The answer… A whisk.

So, we Googled how to make whipped cream without a whisk.  No really useful results.  YouTube was also lacking in data on the matter.

Then, W & P put their heads together and came up with a potentially messy but possibly effective idea.

They found a container with a lid.  They put the lid on… And they shook it like madmen.

We made a video of the escapades.

What you don’t see in the video is when we all go “oh no” what actually happened.  Our biggest concern is that the lid would leak and we would shoot whipped cream all over the cabin and ourselves.  And we actually thought that happened.  But, really, P had a kleenex in his hand from cleaning up some drips and that flew across the room… In a white streak… Looking like projectile whipped cream.  It wasn’t. Thank goodness.

The whipped cream was delicious, as were the pancakes.

All in all an innovative and delicious adventure.

Loved by the King