The other day, I was seeing a patient who was floridly delirious who began screaming and telling me off.

As much as it took me aback, this isn’t exactly something unusual.

In fact, in the hospital, lots of people become confused and some become aggressive like this.  I continued to calmly speak to him and redirected him.  He calmed down.  At least for a little while.

Unknown to me, the other resident and the clerk were walking by the room when this was happening.  This is apparently the conversation that followed.

Resident: Wow, that guy is pretty agitated.  Maybe we should go see if he’s okay.  He is Trisha’s, though, right?

Med student: Yes.  But still.  It sounds kind of wild.

Resident: Wait a minute…  Trisha is in there.

Med student: I hear her voice.  Should we go in and help her out?  It sounds kind of bad in there.

Med student: I suppose.  All the fishermen and drunks and rural stuff.  Are you sure?

Both laugh at me when I come out and recount the story.

Ninja doctor. That would help with some difficult situations. Image from surbrook.devermore.net.

The thing that struck me funny about this conversation was the whole “she went to med school in N____, she’s tough,” line.

It is kind of true.  There are stereotypes sometimes for a reason.

I worked in a lot more rural settings and thus saw a lot more people on my own.  We were a smaller school, so in turn, we get a lot more one-on-one teaching and more of our own patients.

A lot of people drink there.  I don’t know it is proportionally higher, but it is an issue.  And once you have to debate through a few emerg consults with drunken patients, you learn.

Plus, at my school, we were actually coached through sessions with fake delirious patients as a part of our teaching.  And we spend a lot of time on medicine clinical teaching units during clerkship.  So, I guess I am tough.

Whether it actually makes me tougher than other people from other schools, I don’t know.

But it is good to know my colleagues at least think I can survive.

It is funny, though, because generally, we have been known for communication skills or some of the nice fuzzy stuff.  At least that is what I have been told.  Not for our secret ninja skills. 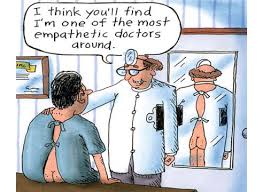 I don’t ooze toughness.  One of the same guys teased me the other day that I seep sunshine and rainbows out of my butt.  Also true.  But, I can hold my own in a difficult situation.  Maybe partially because of the sunshine and rainbows, but also because I can switch on an intense seriousness.

I guess I am tough in the able to handle getting crap from people in a clinical setting kind of way.  I would just never really think of it as based on the geography of my med school.

The whole thing cracks me up a little.