I love being domestic in the stereotypical sense of the word.  I am still nesting… As in I am still trying to get settled in to our house just the way I like it.  I’m still not quite there yet.  We will get there at some point.  I only have time and funds to do that sort of stuff in increments (for instance, I have volunteered the Child to help me during my vacation in re-covering a bench in our apartment that has been cat-mangled).

I am not domestic in that I work so much and have priorities outside of the home such that I sometimes feel like I get behind on things.  Our bed is not always made, we are known to have dish mountains and sometimes I am known to really hunt for clean underwear in the mornings.  Thankfully, my husband is a superstar who isn’t afraid of the vacuum cleaner or the washing machine.

I saw a chore list posted on a friend’s Facebook wall that I acquired.  It has made its home with our postcard and magnet collection on our fridge (yes, some of my decorating tastes may be a bit juvenile by times, but it makes us happy). 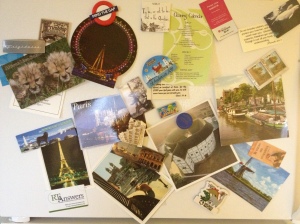 The post-card/magnet stash (we had to get rid of some of the originals when we moved because there were too many… sad face).

The whole chore list thing re-motivated me.  That and that I hate having to power clean on one of my few rare Saturdays off.  So, having a list of things, some of which we do daily, some of which we procrastinate and then a division on non-daily stuff may help us get that stuff done more effectively.  Maybe.

Since this weekend was a delightful (second in a row) weekend off, I not only cleaned, but I have had a chance to get groceries and do some cooking (and see the movie Quartet).

Tonight, we are having French Onion soup from scratch!

I sliced a chunk of my thumb off, but otherwise, it seems to have been a success.

I have also prepared a slow-cooker Cajun chicken recipe to cook while we are at work tomorrow (props to Patrick for volunteering to put the prepared meal in the cooker and turning it on at lunch so we don’t burn the house down (something about being out of the house more than 6-8h that can be problematic).  I didn’t quite have the right ingredients, but some spice variations (to the milder end) shouldn’t be a bad thing in this house. 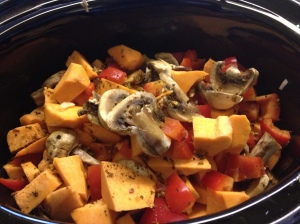 All of this food prep means lots of deliciousness at work lunches this week (woot woot).

On a domestication note, my desk space at work is relatively homey complete with drawings from my “niece” and “nephews” and festive stationary paraphernalia.

On a childish (and head decorating instead of home decorating) note… Look at the fabulous headphones I purchased (for the same price as plain ones) after I finally broke the cord on my last set last week.

I like owls… And orange. What else can I say?

To a happy work week (preferably full of food and clean houses)!